We have Recommendations from Businesses and Homeowners Alike

I would highly recommend Blue sky tree company.  We had the the unfortunate circumstance of our tree limb falling down, across our yard.  With other estimates I was advised to have the entire tree cut down and was given estimates that surpassed anything we could afford, but with blue sky they discussed options and offered ways to cut down cost and were thorough with their explanation and rationale. They were efficient with scheduling and with completion of this difficult job, honest and professional! They exceeded our expectations as we have used other arborists in the past, but now Blue sky is the company we will use for all our tree needs!!

“Matt is courteous, reliable and very professional, not to mention his tree work is outstanding.”

“As the President and Owner of Designs By Sundown, I would personally like to endorse Matt with Blue Sky Tree Service as a reputable and high quality contractor that Designs By Sundown uses on many of our large estates that we manage.  Their attention to detail is meticulous. We have never had a client that was unsatisfied with the work we have had Matt and Blue Sky perform for them. On the contrary, they felt Matt and his staff were extremely professional, polite and safety minded. On a final note, my wife and I have personally used Matt over the last 5 years on our personal home and would not consider using anyone else other then Blue Sky for our major tree pruning.” 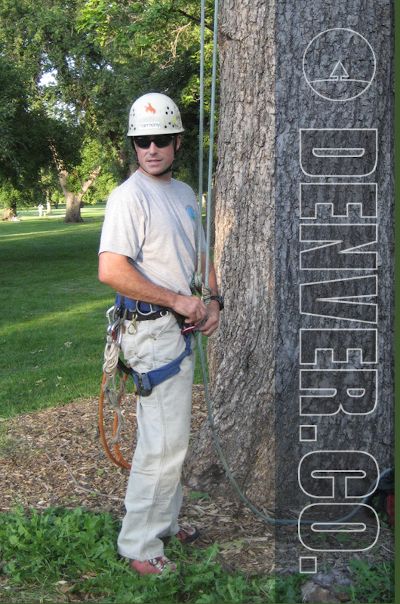 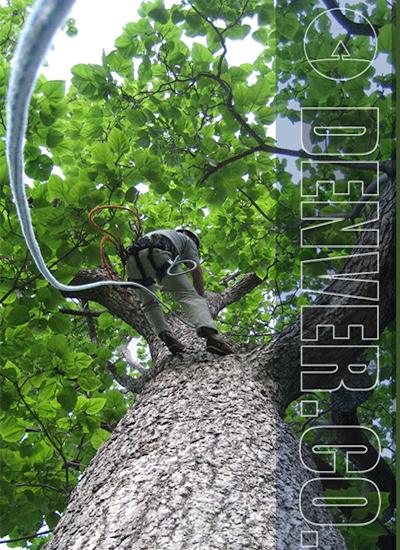 A distraught tree lover called over the damage an early snow storm had done to her honeylocust. She was worried that her favorite tree was damaged beyond saving and needed to be cut down.

Upon inspection, I determined that several large, overgrown limbs had indeed broken under the snow weight and folded in on the interior canopy, but due to the unusual shape and growth pattern of this tree, the damage could be pruned out with minimal effect on the appearance. I explained the tree could be saved, and set to work culling the damage. With a few creative cuts and some careful climbing, the tree came out looking better than before the damage, with a truly unique canopy. She was glad that her favorite shade tree was saved.

Denver Alternative Energy called with a

problem they were having with some newly installed solar panels being shaded by a large black walnut.They needed the occluding limbs removed, without damaging his new panels. Or the new flagstone patio, the communication and cable wires, and the power line running directly underneath the offending limbs.

The homeowner wanted to talk to a neighbor about a full removal, because on the other side of the fence the tree interfered with a satellite dish, a glassed-in sun patio, communication and power lines, an antique pot-bellied stove, and a vegetable garden. They decided to remove the whole tree.

It was as technical a removal as I’ve ever done, every limb and stem painstakingly tied off, cut, and lowered to avoid damaging the surrounding delicacies. It was also one of the most rewarding. Denver Alternative Energy was ecstatic about the increased output of their new solar system, and the homeowner was graciously thankful for the care we took in our task. The neighbor was happy not to miss the game on TV.

from the city informing them their trees had been improperly pruned, or “topped”, and they needed to remove them all and re-landscape with new ones. Hoping to forego this expense, they asked me what could be done?

I determined that while the trees had been “topped” pretty severely, they could still be properly pruned to eliminate the topping cuts and bring them back into compliance with the city code. After a thorough re-pruning, the city was satisfied the trees were compliant, and the business was spared the expense and hassle of re-landscaping their lot. It pays to hire a professional first!

A client had just purchased her

dream house complete with expansive backyard replete with many large, mature trees. She was dying to have a summer barbecue party as a housewarming get-together, but there was a big problem; the trees were completely overgrown and had not been maintained in decades. Dead limbs fell out of them weekly, windstorms left the yard littered in tree debris, and the state of neglect cast a general feeling of dark foreboding over the yard.

I came out to prune the trees and give them the attention they had so sorely been denied. By removing the dead and broken branches, raising the drooping lower limbs, and selectively shaping and thinning the canopies to allow for light penetration, the space was transformed into a peaceful, naturally lit sanctuary. The difference was remarkable, and the party to celebrate her new home came off in the perfect setting.

The Department of Forestry

issued a warning to a client that a large silver maple on his property was a hazard and must be removed. He called me to take a look at it, and apart from some large dead limbs, I didn’t see the criteria for a hazard tree. I climbed the tree and conducted bore-tests in different locations to determine the holding wood density in critical locations, and checked the depth and breadth of visible hollows.

None of my findings indicated the necessity for removal, so I met with the city arborist who issued the ticket. Based on my bore samples, she agreed that the tree was not a hazard, and could stay. I pruned out the deadwood and the tree is still standing today!